I love the idea of the vegetable strata I posted a few weeks ago and recently tried another version of this. I wanted to share this because it's completely different than the previous version. This recipe is more of an idea and you can really use whatever you have lying around. In this version I had some beautiful rainbow swiss chard that I needed to use up and I had also brought home some rye bread that had been sitting on the counter for a few days, and these turned out to be great components for the latest strata. In the previous recipe it made a full 9X13 pan which can serve at least 8, but this time, not only did I not have enough ingredients for a full recipe, but I also didn't want as many leftovers. 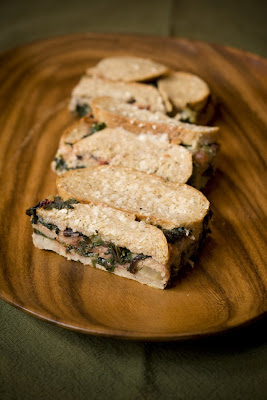 There aren't any measurements this time, I started with an 8x8" pan and layered the bottom with thin slices of rye bread. Then I spread a layer of swiss chard that had been sauteed with some diced onion and seasoned with salt and pepper. On top of that I sprinkled some golden raisins and then repeated the layering process ending with another layer of bread. I cut the custard recipe in half- 1 cup of milk to 2 eggs and seasoned that with some more salt, pepper and nutmeg then I mixed in about 1/4 cup of grated Parmesan. I baked this at 375 until it felt firm in the middle. Use this as an inspiration for creating your own versions. I will continue to post more successful variations!
Posted by Emma Nowell at 11:42 AM

Hi Emma! This looks awesome! I can't wait to try it. Question for you. My mom keeps giving me fresh mozzarella (which I LOVE) but I never know what to do with it or how to use it. Any ideas? Thanks! xoxoxoxo Suzanne