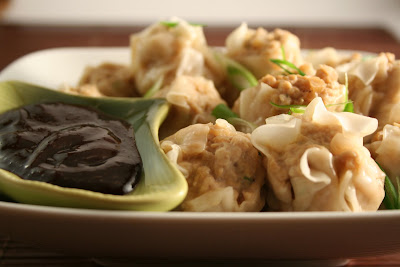 On Sunday it was our one year anniversary. It was a quick year, but filled with great memories. I decided to make dinner and since we were going to be busy all day working on projects I thought I would keep it simple and fun with a few appetizers and some wine. I made coconut shrimp and little shao mai dumplings. I'll post the dessert tomorrow.

Coconut shrimp is one of Ryan's favorite appetizers and maybe one of the only ways he likes to eat shrimp. There many ways to make coconut shrimp but I prefer to use a beer batter and then dip the shrimp in coconut before frying. I find that it gives a more consistent coconut crust. 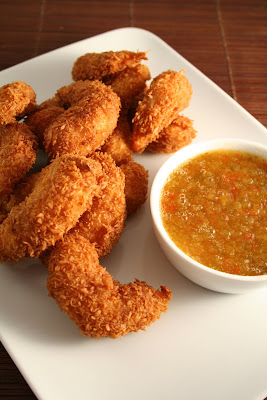 Beer batter:
1/2 cup all purpose flour
6 Tbs lighter beer (you don't want to use dark)
1/2 tsp baking soda
1/4 tsp salt
1 egg white
about 2 cups coconut (your choice- sweet or unsweetened)
Oil for frying (about three inches in the bottom of the pot)
24 large shrimp peeled and deveined
Mix together batter and put the coconut in a shallow bowl or on a plate. Heat the oil to about 365 degrees (use a thermometer to keep temperature consistent). Make sure the shrimp are fairly dry and dip it into the batter shaking off excess and then put it into the coconut, sprinkling some on top (they're easier to handle once coated with coconut) and turning once or twice to make sure they are thoroughly coated. Place the finished shrimp on a lined sheet pan and continue with all the shrimp before starting to cook them. At this point they can sit for an hour or two before cooking them (refrigerate them) because you want to fry them right before serving. Once ready to fry cook only 6-8 at a time so the oil doesn't get too cold and they have some room around them. Fry them until a nice golden color- by then the shrimp will be cooked through. Place them on some paper towels to catch all excess grease and keep warm while frying the rest. I served these with a pepper jelly combined with pineapple. It was about equal parts pineapple and pepper jelly blended together and briefly heated.


The other appetizer was an open faced dumpling. They can be filled with a variety of fillings and are very good and easy to make. I have also included a soy based dipping sauce but you'll see in the picture I used hoisin sauce instead (given the limited time) . I used a bamboo steamer to cook these. If you don't have one of these, they're a great way to steam food and are fairly inexpensive. 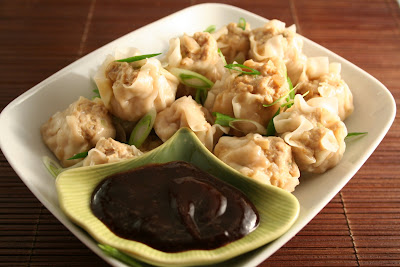 
Mix all the ingredients (except the won ton skins) together . Have a small dish of water near by. Cut the wrappers and make sure to keep them covered after they are cut because they can dry out very easily. Using about 2 tsp- 1 Tbs of filling mound it in the middle of the wrapper and using a wet finger moisten the edges of the wrapper. To shape the dumplings make a little ring with your thumb and first finger and gently use those two fingers to shape the dumpling. You want to make sure the pleats at the top are secure so it doesn't loose it's shape. After it's fairly shaped put it down on the cutting board so that you flatten out the bottom and then squeeze the "neck" (where all the pleats come together at the top) and it's OK for some of the filling to rise out. As you shape the dumplings, put them on a lined tray and when you are done forming them, they can sit for about 4 hours (as long as they are well wrapped and refrigerated) or so until you are ready to cook them. To use the steamer( it works best with a wok) heat about 3 inches of water in the pan and before setting the steamer over the water (which should be boiling by then). Line the steamer trays with parchment(you can also use cabbage leaves if you have some around) put the dumplings in the steamer- you want to make sure they are evenly spaced out (this may have to be done in shifts) and put the lid back on and place the steamer over the water and they should steam for 6 minutes. Garnish with more thinly sliced scallions and serve warm.

Mix everything except the scallions in a small sauce pan and briefly bring to a boil to dissolve the sugar and then pour into a bowl and once cool add the scallions.
Posted by Emma Nowell at 10:26 AM

what a terrific blog you have. Your photos are outstanding! I tripped over your blog and will add it to my "yummy" links!