Fresh cinnamon rolls, a healthy way to start off the day! 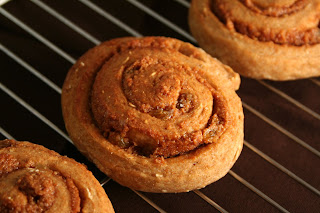 I teach how to make great cinnamon rolls, but not the kind you want to start off a healthy day with. I love sweet breads with the flavor of cinnamon and raisins so I wanted to find a healthier more whole grain version of cinnamon rolls. I found one in King Arthur Flour Whole Grain Baking cookbook that I liked a lot. They are called Dark and Dangerous Cinnamon Buns. I have a filling that I really like and so I paired the dough for these rolls with a cinnamon raisin filling and left them at that. Sure the frosting gives it a more finished appearance and maybe some would argue is the best part, but it also just adds more unneeded sugar. As much as I like sweet things, the older I get, the more sensitive I become to sugar and the effects it has on my body.

Combine the dry milk with the water and orange juice and stir to combine, then whisk in the egg yolk and put into mixing bowl. On top of that add the salt and all the rest of the ingredients, ending up with the yeast on top. Mix the dough until everything is mixed in and let it sit for 5 minutes giving the flours a chance to hydrate. Then turn the mixer on and mix the dough using the dough hook until the dough is smooth and well developed. Put that into a clean greased bowl and let this rise until it doubles about 45min to 1 hour. While the dough is rising, you can make the filling.

Measure everything into one bowl and stir until well combined. Spread onto rolled out dough (when ready)and then evenly sprinkle on the raisins.

After the dough has about doubled turn the dough over in the bowl and gently deflate by pressing down on the dough and in turn fold all four sides of the dough in and turn the dough back over. This just redistributes the yeast and temperature and prepares the dough for a second rise. Let it rise again until double (this should only take about twenty minutes)
Turn dough onto a clean dry surface and roll out into a 12x16" rectangle. Spread the filling over the rectangle leaving one of the longer edges with a strip of no filling about 1/2" wide so when the dough is rolled up the filling won't be oozing out the roll. Start rolling with the long side that has filling all the way to the edge. Don't roll too tightly, but make sure the roll isn't so loose it looses it's shape. Roll all the way up and make sure the seam is sealed (you may need to gently pinch it with your fingers) and put the seam side down on the cutting board and cut the log into 16 equal pieces (the slices will be about 1" wide) place them in a pan or on a sheet pan (you would need a greased 9x13"pan or 12" round pan, or a sheet pan if you prefer that they stay separate). Put the pan in a warm spot and preheat the oven to 350 and then place the rolls in to bake when they have just about 1 1/2 times the size they were before(this will take about 1-1 1/2 hours) Bake until golden about 25- 30 minutes 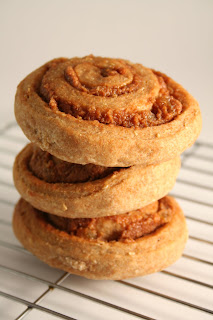