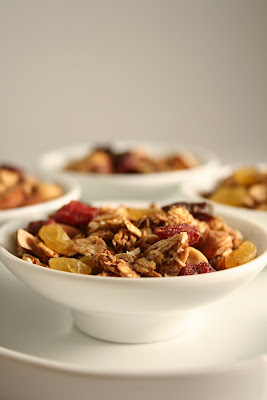 I had been wanting to make some granola for quite a while, and always seem to run out of time and then see the bulk bin at the grocery store on sale (there's a good low fat apple cinnamon granola we like) and give in and this cycle has been going for some time. Finally we had been out of granola for quite a while and I had the time to make some! I also had a large container of pear butter I have been wanting to use up. I went on a pear and apple butter making spree a while a go and managed to can most of it but I had a container in the refrigerator I had wanted to use. Despite all the recipes I had that I wanted to try out I thought it might work to use the pear butter as a binder, and it did! It ended up making a really nice granola. I know it is easy to make your own but I was reminded of just how easy it is and really how little time it actually took. You want to make sure to use a good quality apple butter (maybe one without high fructose corn syrup... Granola is so flexible as far as what you put in it. You could use all oat flakes as well instead of the combination of barley, oat and triticale. You can also use any kind of nut and fruit combo you want.

Pre heat the oven to 300. Mix together the oats, barley and triticale along with the flax and coconut. In a separate bowl combine the pear butter, maple syrup and spices. Pour this over the dry ingredients and mix until it looks like everything has been coated. Spread this out over 3 greased sheet pans (some can sit in the bowl if you are short on sheet pans). Bake for probably about 30 minutes or so. You really are looking to see that the oats are golden and that once taken out of the oven, and when it cools, it is crunchy. You can test this by taking a little bit off the sheet pan and letting it cool for a moment on the counter... and if it seems like it's pretty crunchy once it's cool to the touch, then it's done. To ensure that it gets cooked enough keep cooking it as long as you can before it gets too brown. While it's cooking you want to stir about every 10 minutes or so to make sure all the granola gets moved around. If you don't you'll end up with some nice and crunchy (the stuff on the edges) and then some that's pretty soggy (the stuff that's right in the middle). After all the granola is baked and fairly cool then you can add the dried fruit and toasted nuts (toasting them brings more flavor out). I don't think I really measured this, just a hand full of this and a hand full of that.... so if 2 cups total looks like too much to you, don't add it all in or if you like a lot of stuff in your granola, add more. Enjoy! 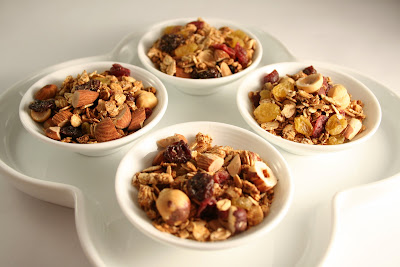